making the best of the Big Q... 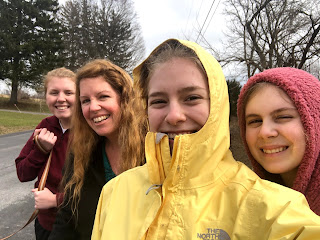 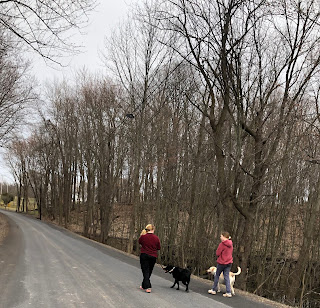 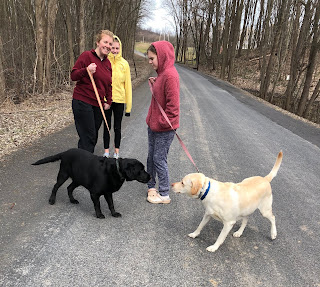 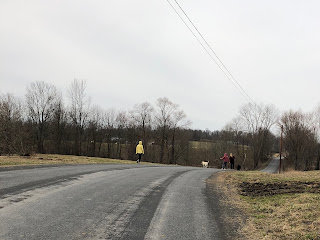 Yes, we took the pups for a walk today. The sun was out earlier, but it was still quite cold out. By the time we got out the door, it was overcast. But, it was very nice to get some steps in, to get outside. Not a single car passed when we were out.

Abigail is moving in tonight. She lives in a house in town with Emily, who is a nurse practitioner in general practice, and Mariel, who works in out-patient oncology at the hospital. (Please keep them in your prayers, as well as Molly Rose, who works in a hospital in the city, on a gen. med. floor, and Aaron, working in oncology at Stanford in California). So Ab decided to quarantine here with us, because...well, the nurses are as likely as anyone to be exposed, and Abigail has a heart problem, and allergies.

Evelyn is moving back in soon too, and who knows who else, ha.

Paul went today and, believe it or not, gave blood. I know! He is a true saint. But there is still a desperate need!

The kids have finished their school work for the day, and there is some SIMS playing right now. Grand Theft Auto! Yay! Why not? They have been reading books, and we've walked, so why not? Last night, Paul and I watched a movie about Israel, and these guys watched High School Musical.

They also cracked into: Doritos, Almond Joys, Non-Pareils (the milk chocolate disks with sprinkles), AND the store brand chocolate sandwich cookies with the chocolate in the middle. I told them not to eat all the Quarantine Snacks at once! They are the ones telling me, in the store, not to get too much stuff, but then they eat it all...if we're stuck here for a while, well, good thing I have a very big stash of Easter candy in my closet.

I think I've found the secret to weight loss: panic, ha. I came back from California weighing less then when I left, which is strange, then lost a few more pounds. I just am not really hungry. I am out of the habit of eating sugar and bread, and not much sounds great right now, but I'm sure that'll change as I start to bake bread. Yes, we have plenty of flour and sugar, and some yeast...so mmmm. A Target order came today with dog chow, cat food, flour, a large bag of M&M's, and a box of brownie mix. Also, one of the three puzzles we ordered from Walmart came.

I also ordered some seltzer for Walmart Pick up, Evelyn is going to get it for me. It's definitely a non-essential, but it's oh-so-yummy, the no sugar, flavored seltzer.

We are considering getting a new t.v. I know, it sounds really...entitled. But, I had saved up money for the kids' trip to Norway, for Easter, and now it's all cancelled, and our television is really old. Lots of buttons don't work, and we're in the house...so we're thinking about it. Not a rude-@$$ huge-0, in your face jigundous one, just like 40 inches or something, bigger than what we have, and that works well. I'm thinking around $200. It'll help the economy!

Well, time to get dinner started...we have a nice package of pork chops, the last of the fresh meat...for a while anyway. We have stuff in the freezer. Off I go....
Posted by 16 blessings'mom at 4:02 PM

Possibly unpopular opinion- get a TCL TV. They're the Walmart brand, I think. Good picture, terrible sound (so buy a cheap sound bar too, to solve that issue). But TCL's are great because they support a TON of apps. You don't have to chromecast to them or use a firestick, because that's all directly run off the TV.

We have a 55 inch flat screen LG, we bought it a few years ago, and I am not even going to apologize for the hugeness, lol. (ok, its my husband who wanted it, I really could careless, grin)

Have a great rest of the week, my friend.

I say get the tv if you want. It is hard enough to know that we have no idea as to when we will be able to be roaming around and doing our normal lives so I say you are more than able to get a tv since you had the money saved for something much nicer. Our anniversary trip is cancelled as well and I am pretty bummed about it.

LOL, I agree with the "weightloss plan".... I feel like the worry/anxiousness has benefited in that department for me too.