well now we're on to Saturday...

Ahh, Saturday, no one going anywhere, we can do what we want...ha.

Yesterday, Mr. Golden Sun decided to shine down on us. 48 degrees, but sunshine! And you bet we were out in it! 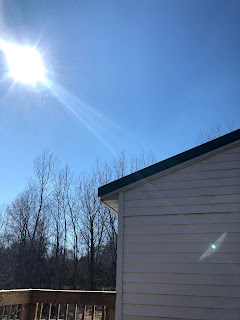 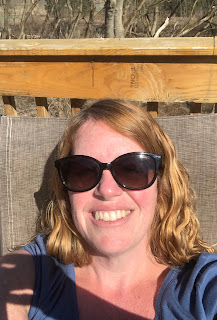 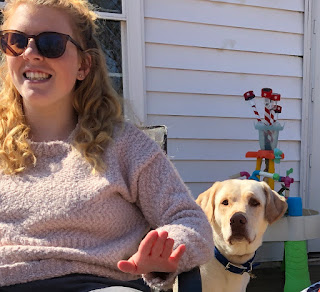 Our Dunkin outing turned into a Target run. Target is an "essential" business, I always thought so too. The girls had a mission, Miss Charlotte Claire and Miss Camille Anaya: to get hair dye. Now, things are different now, these kids have been disconnected from Real Life, along with the rest of the world, I know, but still. I decided to just let them have pink hair. We also had a few things we needed, and Target was actually NOT a zoo. We wore gloves, and stayed in two separate groups. The shopping cart had just been totally wiped down and disinfected, and there were more employees than customers, wiping things down and restocking shelves. The Starbucks cafe is closed, and the front snack bar too, with it's tantalizing caramel corn aroma. We didn't look at clothes or anything, just bought another puzzle, and a game that looks fun, to drop off for Anya and Elise. I got them a bag of little chocolate Hershey bunnies, too. And some bubbles for Wulf, and a Pez bunny.

There was actually toilet paper on the shelf, and we actually didn't get any, because we have enough for now. We did get a package of chicken. Last night's dinner was oven nachos with chicken, and some yummy toppings. Tonight is pizza night, I'll make a Fathead pizza too, with almond flour crust.

We were planning to go out to a nature preserve with the pups today, but it looks like it might rain all day. I did not go on my walk yesterday, for the first time. I was waiting to go with Abigail when she got home from work, but I had a niggling headache that started building up...uh oh. I should have taken something earlier. By the time I popped a single Excedrin, it was a pounder, mostly around my right eye. It hurt like the devil. I took one more Excedrin, then on ibuprofen, then I excused myself to go lie down for a few minutes, which turned into an hour. It was one of those humdingers, wherein if you even move the pinkie finger, it pounds and you almost barf. I couldn't even think a thought, or it drummed.

Thankfulness, thankful for pain relief...so utterly thankful, and that it kicked in, and helped. I was able to get up and rejoin the family after only an hour. I hadn't eaten yet for the day, and dinner was ready, how sweet is that? We had a family zoom chat, which was mostly excited little Lydia dancing around and singing and talking to Anya, but it was so nice to see her, and just see the kids. Kathryn joined from Oregon, so we got to see baby Achilles too. It's nice we have the technology we have in these days.

Here in central NY state, spring struggles to arrive. March is always that month of hope...it takes SO long for spring to just kick in...little teases of a sunny day, a warm day, but with rain, very few really temperate days...this year, we just NEED to be outside, more than ever, and come on! Just be nice out!

I got a few of the springy decorations out yesterday...maybe tomorrow I'll post more pics...if I'm not too busy, ha.
Posted by 16 blessings'mom at 9:50 AM

Pouring rain here in Hornell...and I do mean POURING! HEY! There is nothing wrong with pink hair, grin.

We were out and about yesterday as well, of course, being the rebel that I am, it is what it is. lol

Have a great day friend, regardless of the situation that we are in, smiles.

Looking forward to seeing Cam and Char with pink hair!!

Hi Della. We are on day 11 of self isolation and we haven’t killed each other yet 🤣🤣 24/7 with one person, not leaving the house etc is a bit of a challenge at times, but nothing compared to many people, so therefore I’m not complaining and I’m thankful. We have also sat outside every day that the sun is out. Yesterday it got up to +10C here, so we park ourselves out on the front porch where the sun is in the morning and early afternoon, and enjoy and talk to all the people that pass by. People in vehicles even wave sometimes!! I think your two little girls will be cute with their pink hair. Modern technology is wonderful, and such a great way to keep in touch. That sounded like a corker of a headache. You poor girl! I’m not a headache person thank goodness, but my hubby get cluster headaches. Horrible sometimes. I just baked some banana, oatmeal muffins and we gobbled up 2 each with our afternoon coffee. So good when they are fresh from the oven. Have a fun supper 🤗

I have followed your blog for years (I think Char and Cam were only 6 and 7 years old when I started). In this day of social distancing, I thought it was time to socially connect instead. :).

The two of us don't have much in common on the surface..I am 66, live in Iowa, have three adult children and 6 grandchildren, and am a retired elementary teacher. But our values of family, faith, and doing our best are the same.

I've held my breath for your doctor scares, children moving across the country, and other concerns. I've cheered for new grandchildren, sunny lazy pool days, and fun travels with family.

I'm a faithful reader and just wanted to reach out to let you know! We will get through this scary time; I love all the wonderful connections people are making and creative ways they are sharing.

Well Robin, hello! You cannot possibly know the gladness your greeting brings me this morning! I am genuinely glad to "meet" you! I bet you have stories to tell, having taught the little kids! Do you blog? If not, you should! I think teachers probably have the best stories. When my oldest daughter was in fourth grade, her teacher told the class her favorite Christmas story, which was a true story: A few years back, there was a girl who was very poor, and when it came time to exchange class gifts, this girl gave a coloring book that already had some pages colored. The little girl who opened the gift, delighted in it, and praised it, as if it were intentionally already started for her. Isn't that a heart-warmer? Anyway, I do believe that God causes all things to work together for the good for those who love Him, and that we live in these times for a reason, where we can connect. The internet can be used for good, and for evil, of course, but we choose the good!
You take care, and thank you for saying hello! Let me know if you have a blog somewhere, if not, start one!!!
Della