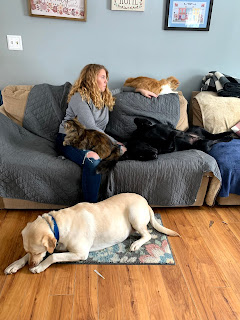 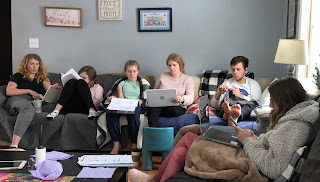 Sonja K. with the kitties and puppies...so much coziness!...and the homeschooled kids with the online college kid, and Abigail, getting some work done...

Jonathan made scrambled eggs and bacon this morning while I made a big batch of waffles, our little brunch. The kids stayed up and watched a movie last night and slept in too late, but who really cares? Abigail is on half day work, so she goes in every afternoon. She can stay up later at night too, so it's like summer vacation...without the summer.

Our dinner last night was leftover chicken pot pie, warmed in the oven yum, and leftover pasta, sausage, meatballs and sauce, ect. We are being much more conscious of using/eating all the leftovers now. It's actually much easier to plan meals because the kids are all here, every night, no guesswork. No one is dropping in for dinner either, so we can safely plan on eight people. They will have afternoon snacks, because of the late brekky/brunch thing, so as long as they don't have too much, they'll all be hungry for dinner.

I've read that there have been increases in domestic violence incidents, especially involving children. Being confined, in close quarters, brings more stress because one's impatience is stirred up, right? It's never actually the fault of the kids, it's because the parents or caregivers' love grows cold. This is not good. Oh how I wish the whole world could hear the gospel, that all could be aware of their own sin, and learn to be forebearing and gentle.

Here in our house, things are going well, but not because we magically all get along! There have been a few tears, lots of encouragement, and plenty of prayers in need, because we all recognize that we need to humble ourselves, individually, in order to have peace. Evelyn is doing a zoom call for a class, which is extremely important, so we all have to be quiet for a few hours. Paul is working from home, and actually has a job interview today for the job he already has, which is weird, but hey, these are weird times.

The kids are all doing school work right now, our walk will be later in the afternoon or before dinner.

We still plan to go out for a ride on Friday, we'll stop and get out if we find a park that's empty. We might still go to the Dunkin drive through, too. It's funny that what was just recently a little blip in a regular day can become an entire outing!

There's a new thing going around where you post an embarrassing pic of yourself and caption it, "Until Tomorrow". At least it's not daring each other to lick the deodorant at Walmart or to cough on old people. An entire world full of half bored young people, oh dear me.

I'm trying to be a liberal as can be with the kids about watching things, ect....yesterday afternoon, they were watching The Simpsons and eating Oreos. Well, they do their schoolwork first, so who cares, right? And if they do eat all the snacks, well, we can bake stuff. Oh, the first world probs. Compared to what so many people are going through right now, our problems are like jokes. The people dying in hospitals with no visitors allowed, women giving birth alone, people with weak immune systems and damaged lungs getting sick, even healthy people getting sick with the virus...

So I pray, so many times a day, that God will have mercy on this world, will bless the doctors and nurses and the healthcare workers, that people will turn to Him in all of it, and good will come of it. I heard a story yesterday from my sister:
A man was very sick with Corona virus, extremely sick. He was in the hospital, really struggling to breathe. He started praying to God for mercy and for help, then he felt as if someone breathed air right into his lungs. By morning, he had turned a corner. His doctor came in, asked the man if he was a believer, because, "a miracle" had happened.

(My sister said she heard this on Fox News). I haven't read/heard the story, just from her. But it's uplifting, nonetheless.

My sister, keep her in your prayers! She has had bad asthma all her life, very bad lung function. Couple that with her in remission breast cancer, and other health issues and ailments (one kidney barely functions, congenital birth defect, ect ect ect)...so pray for her, that she does not get this virus, of if she does, that it passes over her like a feather in the sand, barely leaving a mark.

I do pray, because prayer moves mountains. I pray for my internet friends and my real life friends, and and and....so there's no reason to be discouraged or bored, there's plenty to do. Just pick up that bible, and dig in!!!
Posted by 16 blessings'mom at 12:44 PM

Good morning............those pictures are pictures of contentment Della 🥰 Suri lies on her back the same way my Bindi does......Hudson NEVER lies like that. I plan on sitting out in the sun today......it’s beautiful here 🌞🌞🌞 Have a super day!!!

My biggest fear in all of this is not if I'm going to get it but thinking of all the kiddos home with maybe a father who drinks to much and getting worse because he is home more. Or a mom who has lost her cool because she can't clean or cook with out a little under her feet. Domestic violence. I hope and pray that everyone can count to 3 or even 10 before they react.
I'm one of the lucky ones because I don't have little kids. My grands but I don't have them.

Their mother who had them last weekend for her visit, let them have a sleep over!! Lordy b! Yep.. thinking she wouldn't get caught and of course she did because the boy who slept over was in the school that was unlucky enough to have one or 2 people infected with the virus. So , from last sunday night my son, his new wife and her son and his two kids are in a very small house all together for 14 lovely days! And the so called mother isn't taking blame for it? LOL I find that hilarious! Nope, she said she didn't know! Well of course not , they were just diagnosed. Oh my son was not happy. But here we are....

Even when this is done, is this ever going to be back to normal? I hope so!

Thinking of your sister and those who are very vulnerable to this terrible virus.
I love that your family is together; doing what you should be doing and enjoying (mostly) each other. :)
Yes, it's crazy when a simple trip to DD can be an actual outing for the day. It's a crazy time, and I pray it ends soon.

Even with only me and the "Needy Dog", I am staying on a routine of sorts. It has been the first time in YEARS that I have cooked all my meals. I had forgotten how much I enjoy cooking! I miss my friends and family, but am thankful for technology--lots of texting and face-Timing going on. Love having a glimpse of your busy life. Those days are a treasure!
Blessings!