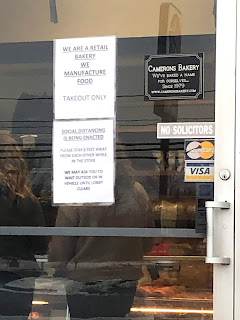 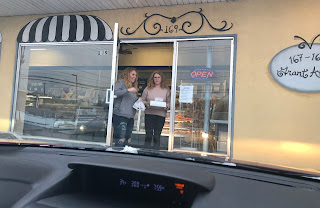 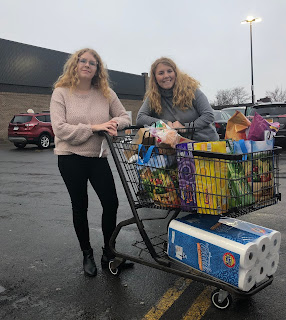 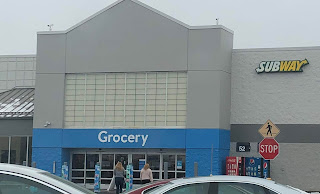 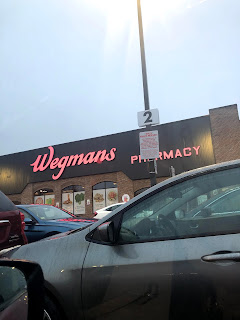 Don't hate me! We have eight people living here. The girls went in for me, wore gloves, stayed away from others, and didn't take more than what was polite. They did get a package of toilet paper, and the big pack of paper towels, one package of chicken, and one package of ground beef from a different store, since you can only get one kind of meat at a time in Wegmans.

They went into the bakery, and we now have donuts in the house.

We have general meal plans, and are very thankful for what we have. We do have others we will be able to help if they need it, like Joe and Beth, and Emily and Mariel, if they aren't going in the stores anymore.

Last night for dinner was spaghetti. I only had some of the sausage with sauce over green beans. The kids love spaghetti, and there's enough left for tonight.

It's still cold and snowy here...we'll go for our walk later.

We have big plans! We are having a party on Friday night, dressing up and having snacks. We're trying to keep busy, keep planning things, so the kids don't get downcast. They have piles of schoolwork, so I try to take it easy on them when they want to just watch things. I do nag them to go on the walks, though. Char and Cam have been learning new dances, and exercising with Evelyn. We watched a few episodes of HGTV, which I have no idea why we get now, on the new tv. It's tempting to watch it all day long ha. But we don't. Plus, Paul doesn't like it, probably all the whining and witching. This house is too small, we NEED an extra bedroom. (they have two kids, and NEED a four bedroom house with four bathrooms. Their two kids cannot POSSIBLY share a bathroom, oh now. It IS rather hard to watch sometimes.

Ah well. Sonja is doing laundry, Evelyn stuff for college. Sonja's senior year of high school is pretty much in ruins, Evelyn's college turned upside down. Abigail is working half days now, which means half pay. One of her co-workers just messaged her that she (the co-worker) was laid off, let go. So there certainly are sufferings afoot. Don't you just love that word, "afoot"?

Believe me, I'm not going crazy, because I ALREADY AM, ha. Enjoy your days, and remember:

..When the Lord brought back the captivity of Zion,
We were like those who dream.
Then our mouth was filled with laughter,
And our tongue with singing.
Then they said among the nations,
"The Lord has done great things for them."
The Lord has done great things for us.
And we are glad.
Bring back the captivity, O Lord.
As the streams in the South.
Those who sow in tears
Shall reap in joy.
He who continually goes forth weeping,
Bearing seed for sowing,
Shall doubtless come again with rejoicing,
Bringing his sheaves with him. (psalm 126)
Posted by 16 blessings'mom at 10:18 AM

My kids are so spoiled. We have three kids in a 5 bedroom, 3.5 bathroom house. Whenever we even start to think about downsizing, the kids revolt at the fact that they may need to share a bedroom or have more than two of them sharing a bathroom.

That is the very Psalm my daughter shared with us when Grandma Carol died last week, and the one on my read thru the Bible today! I love it.

HA...thank you for the smiles...I was going to make a flippant silly remark about the TP, but, nah...I just thought it was funny (your title).

Still empty shelves here in Hornell...wondering how it will be in 2 weeks when folks start getting paid etc...sigh.

Hi Della. I have to say some of those. HGTV shows are sooo over the top. I like some.....Chip and Joanna, but they’re not on any more. We’re watching DOWNTON ABBY again!! I just loved that series. Anyway, TV can be such a big waste of time sometimes......there is so much rubbish on, don’t you think? Well that’s just my opinion. We’re on day 7 of our self isolation, and I for one will be happy to get our doggies home next Wednesday. I can’t wait to see their happy faces, wiggly bodies and waging tails 🥰🥰 I’m looking forward to going to the grocery store too. That will be so much fun to have a party on Friday...........gives everyone something to look forward to and plan. You will all have a great time. Well I’m off to the blanket show 😴😴