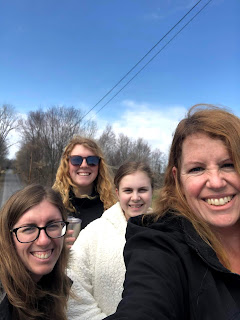 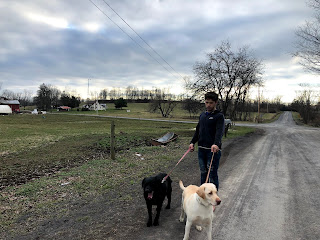 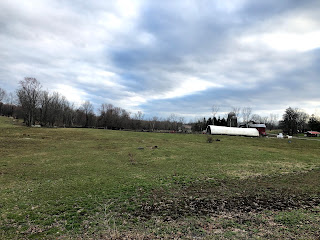 I'm very thankful we can still walk down the road. I read that in Chicago, right now, you can only just go outside for a bit, can't go on a long bike ride or a long run, have to stay close to home. I saw a video from the U.K. of people out in the sun in a city park, and being dispersed and yelled at and sent home, by the metro police. I saw a surfer in Sardinia being called in by cops on horses, told to leave and go home. (because duh, he was infecting the whole world by surfing). The comments on these articles astound me: everyone is in agreement, we need to isolate, and the government knows best!

Some people have more common sense than others, I suppose. But sitting on our rear ends in our houses is not good. We need to get out and move. This is tricky, because it's human nature to want to gather, and teenagers especially, don't have a good grasp of long term consequences.

Maybe I've just read too many dystopian novels, or watched too much Netflix, but this whole attitude of being tracked, watched, and sequestered just freaks me out. In Russia, there are thousands and thousands of cameras, and they WILL get you if you defy a quarantine.

I am comforted that God knows and plans all things, and that this earth is only my temporary home.

We went on our walk early today, because, you won't believe this: the sun was out! It was over 50 degrees, and sunny. We got back, and before the clouds rolled in, we sat in the sun, we basked. It was wonderful, even if the wind was downright chilly. I put on a sundress, my sunnies, and a dollop of sunscreen on my nose. It smelled like warm weather, ha, with that sunscreen. It lasted 15-20 minutes, then where did it go? Now it's gray. Again.

But I won't complain. Remember the slaves in Egypt, given their freedom, how quickly they forgot and started complaining? God gave them bread from heaven, rained it right down to them, they wanted...meat. God HATED that, the complaining. So it's important, vital, to practice thankfulness. It's the greatest spiritual weapon against complaining that there is.

The dogs are snoring on the couches, the kitty sitting there with Miss Char, who is still doing school work. Camille is finished, and working on the new puzzle. 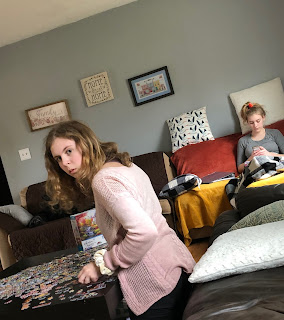 Dinner last night was a roaring success, thanks to Miss Evelyn Joy and Mr. Jonathan...Jon grilled the chicken breast outside, Ev planned the meal: chicken/rice bowls. There was corn salsa with red onion and cilantro, and chopped tomato/onion/cilantro, chopped black olives, cheese, sour cream, lime tortilla chips, and regular ones, along with Basmati rice. I ate too much, then dessert was: brownies, which I didn't even taste, and some low carb cheesecake for me, made with cream cheese and heavy cream and an almond flour/butter/crunchy peanut butter crust, with blueberries on top.

There's some left in the 'fridge, but I am fasting until dinner time. Dinner tonight: tacos/taco salad. We don't have many fixings left, but we do have the burger, the tortilla chips, cheese, and salsa.

We have pizza dough in the fridge for Saturday night, and are having some sort of nachos tomorrow night, mostly the same as tonight.

I've noticed that it's much more difficult to fast, to eat low carb, to stay away from sugar, during these days of quarantine. I joked that I'm going to come out if this weighing a hundred pounds more, but I sure hope not! I'm actually hovering about ten pounds LESS than I was at the lowest weight I got to, around 8 years ago, or whenever Ben got home from Afghanistan. So I've lost about 38 pounds since July first...I still have at least 40 pounds to go...but the good news is that I'm inching out of the "obese" category, less than ten pounds to go, and I'll only be "overweight", ha!!!

Ah well...the girls are getting antsy, what should we do now?
Posted by 16 blessings'mom at 4:09 PM