a warm and blustery day....

(Shh, it wasn't actually windy, but "blustery" is a nice, Winnie-The-Pooh sounding word....)

This morning I  got out the door bright and early with Abigail, as she had to do some errands for her business.  (She just started her own bookkeeping business!).  We went to Aldi after, because we're exciting people, and we eat food and need groceries.  I didn't get much.  We still have meat in the freezer (good thing we didn't lose all of it when that freezer broke, some in the middle was still frozen solid....). I did get some of those little oranges, and dang it, our three huge-0 boxes of fruit from Grandma in Florida arrived this afternoon! 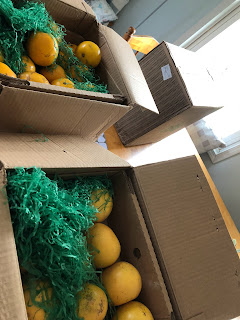 This is a lot of citrus!  I also got from Aldi:  more Hershey kisses, coffee cream, mini cucumbers, carrots, sour cream, butter ($1.89 a pound!), avocados, and a few other things.  Just riding along with Abigail and talking, solving the world's problems, so nice.

Home...ahh, home.  I wrapped a few things that came in the mail...oh dear, ordering online is hilarious.  Last week, I needed more magnesium glycinate, so I ordered from Walmart, as I had checked in the store and there wasn't any.  It was like $28, and $35 is free shipping.  So either pay $5.99 for shipping, or spend seven more bucks, which means I'm only paying one dollar for seven dollars worth of things, in a way.  I picked out four  Nerds Ropes for the kids stockings, they came separately in a package.  I ordered two Baby Bottle Pops, they came separately in a package, and one package of Sweet Tarts Christmas shape candies, the movie theater sized box, one dollar, it came in a big box all alone.  I can't even imagine how much it cost Walmart send it all.

The wrapping paper from Target was bad too, three rolls ordered, each came individually in a huge box.

This afternoon, Wulf and Tennyson came over. 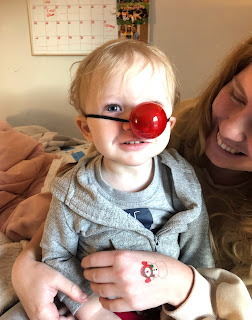 Tennyson was Rudolph, with Sonja... 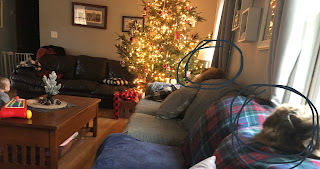 The kitties flanking the couch... 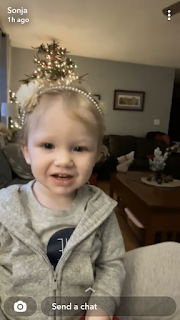 The pic I stole from Sonja of Tennyson with a pretty headband...

Can I just say this:  two little boys sure can make messes!  Sonja was playing Jenga and Sorry! in her room with Wulf, and Tennyson and I were playing a game called Trash The Living Room, and I was losing.  He got one of Jon's muddy Muck Boots from over near the door, and started filling it with refrigerator magnet letters.  I replaced the boot with two big plastic cups, which kept him busy for eight and a half minutes, then he scattered the letters far and wide.  He pooped up his back, he ate a small handful of gingerbread play dough, and he spilled Wulf's water all over.  But, he was so good.  So sweet, and so funny.  Wulf gathered up some jingle bell decorations and put them on his balance bike handles so he jingled when he sped around.  He only fell three times, but it got better when Sonja told him that it's against the law to ride your bike with your eyes closed.

Their mama and papa had a nice time, went to dinner...Adrian did well in college, he had a GPA in the high nineties, got 97 on both of his final finals.  He still has two years to complete his bachelors in chemical engineering or paper engineering, phew.  Margaret works full time at home and watches the boys, Adrian helps with them too while doing odd construction jobs and homework.  It's a busy time for them, to be sure...

Remember yesterday I said that normal numbers of cases of myocarditis per year for under age 50 are around 600 for the U.S., and that this year there were over 11,000?  That number is now 13,000, according to the government VAERS site.  There have been 18,000 vaccine deaths in the U.S., and of American citizens, according to that same sites, normally if a vaccine has FIFTY deaths, or a hundred, there will be investigations.  That 18 thousand is a solid number, but there are many many more that are not reported to VAERS.  What's my point?  Ask yourself:  what sickness is there in this world in which a sick person is told to stay home with no treatment, until they cannot breathe anymore?  The doctors who have found early treatments that work, have been treated terribly.

And this cannot be true:  Dozens of lawmakers on Capitol Hill have invested in companies that have a direct stake in the nation's response to the pandemic...nor can this:  2 days ago Pfizer acquired Arena Pharmaceuticals, they specialize in cardiac arrest medications.

Ok here I go, "Ask yourself: what sickness is there in this world in which a sick person is told to stay home with no treatment, until they cannot breathe anymore?" What sickness in the world allows a 24 yr to die? There are plenty of treatments out there, at some point, folks have to address those folks who were left to die. I hope to change that. We hired an attorney out of Elmira...ok, not meaning to sound debbie downer.

I want to you wish you and your lovely family a Merry Christman. Thank you for the many smiles, Della.

Praying that it goes very well for you, Linda!!! We've all heard way too many accounts of this outrageous treatment! It has to stop!! The patient's/people's health and wellbeing is not what THEY are interested in. Again, I hope you are extremely successful!!❤🙏👏

Where did you get the number for vaccine deaths?

Linda...I know you probably listened to Joe Rogan and Dr. Peter McCullough, if not, it's a must. So much info! God bless you, and believe me, you and Dave are both in my prayers.
Cheryl, true true true!
Anonymous: I don't like answering questions when the person doesn't leave a name, but I will this time. It's in the next new post...and it's called: The VAERS website, which is the American CDC reporting site. It's estimated that for every one that's reported, there are actually at least FIVE, because there's no actual requirement for physicians to report to VAERS. Each one on there is, however, verified by the government. So the actual number is almost at 20,000, so that would be almost 100,000.

The kiddos are adorable! God bless you all and Merry Christmas!! xo