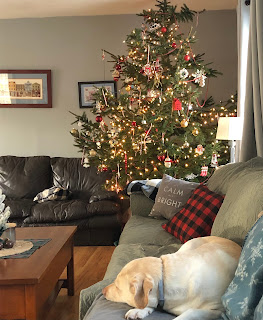 Ahh, the twenty dollar tree...it's too long in the trunk, and butts right into the ceiling, but this was not realized until it was firmly placed into the base, and I mean firmly, as in small boards screwed, with the drill, right into that tree trunk, so it cannot fall over.  So I notice it's hitting the ceiling on top, and casually mention it, and they're all like, if you don't like it, you fix it!  So, it's fine!  That one little branch on the top needs lopping off, but again I'm not getting on a stool and risking life and limb for it...ha.  I do love the tree though.... 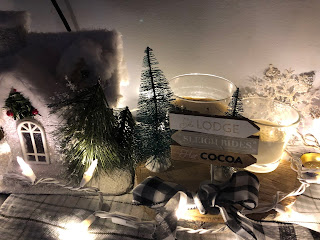 I love all the Christmassy stuff... 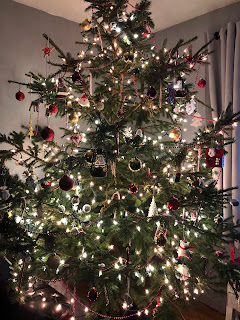 It's beauty lies in the eyes of the beholder, I suppose. 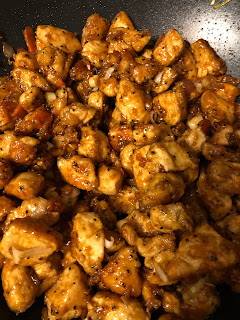 Here is something else so beautiful to me...mmm-hmmm, that's black pepper chicken.  I had a five pound package of chicken breasts, all cut into cubes, in a lemon juice marinade, so I looked up Chinese chicken recipes...this one came up, and I think it turned out fabulous: 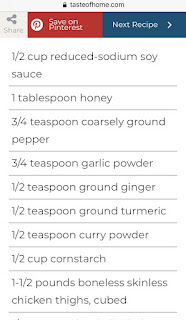 I added less turmeric and curry, but more pepper and ginger. 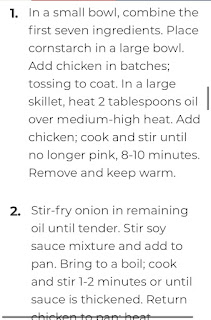 The chopped green onions are to top it with, I didn't bother with cilantro, I do NOT think it's a flavor that goes with this dish.  It turned out a bit salty, despite using lower sodium soy sauce, so be sure not to add any salt.  (I had sprinkled salt and pepper on when I marinated it in lemon juice, oops). You could taste the lemony taste, which was good, and it was really tender, so I suggest if you make this, you do this part too.  I double the recipe for five pounds of chicken, and it was the perfect amount.  We had this with cauliflower rice, and Basmati rice.  I was going to steam some broccoli, but I never got around to it, and this was a filling and delicious meal.
The good thing is that there are leftovers....:)
So we are going to be very busy, because our church is building fun things!  We don't use the property much during the winter, so a new project is starting to keep the young people occupied!  A really nice hill has been in the process of being cleared of trees, so we can make a sledding/skiiing hill, and a snowboarding course.  There will be a new building with bathrooms, and outside saunas and hot tubs.  The building of it will all will be part of the fun, and I'll be there in the kitchen on many a Saturday!  It's nice to prepare healthy, hearty meals for the volunteers!  This coming weekend, we're making breakfast sandwiches (egg, cheese, sausage, on bagels), fruit, yogurt, juice, plus of course coffee...lunch:  grilled turkey and cheese sandwiches and homemade chicken soup, dinner:  roast beef and gravy with baked potatoes and carrots, and rolls....dessert:  hmm, haven't decided.  It's only for 20 people this weekend, so it'll be easy.    I get to go shopping to buy all this yummy food, probably today.
We're also having a birthday party for our Abigail Marie, on Sunday afternoon.  I'm thinking to make chicken and biscuits, green beans, and homemade applesauce, and some cupcakes for dessert.  If I do my shopping today, I can bake the cupcakes tomorrow, because I'll be gone most of the day Saturday....
My Christmas shopping is almost done.  I keep thinking that I need one more thing for this one, one more thing for that one, ha.  I had $10 Kohl's cash, and there's free shipping, so I ordered $30 worth of good fun stuff from there today, but shh, I can't say what it is, or some girls will get their hopes up thinking it's for them, but it's for their sister!  Oh, one cannot be FAIR with eleven daughters!
For Kathryn and Darius and the kids, I just ordered a few outfits for the kids, and some chocolates for them, and had them shipped to their house, and Paul ordered a few things for Aaron and Riley.   (I told Kathryn that I am just not of the mind to pack up a box and ship it, when stores will ship it for free ha.  When she moves to the east coast, I'll buy her better stuff.:)
Tomorrow is Aaron's birthday, my California son....Jonathan and Camille are there, I told them to get him a gift and wrap it....
Our chest freezer has died.  It has all that cow in it, so we need to replace it pronto, Merry Christmas to us.  It's one way of getting it cleaned out...I dread it.  Work, work, work, right?   Replacing appliances isn't my favorite way to spend money, but then I'm thankful there are some available, and we don't have to order and wait, and have everything in the freezer go bad.  THANKFUL.  THAT IS THE KEY WORD.
I just want to mention regarding yesterday's post:  I did have a good childhood in many ways.  My mother was precious, she was so good to us, so much fun.  I did feel very bad for her as I grew up and realized how much she had to bear with my father.  He would be in one of his moods, and she would come out here to stay with us for a few days, but the first thing she did when she got here would be:  call him and see how he's doing.  They loved each other in their own way, and when he was good, he was very very good.  When he was bad he was horrid.  I am thankful that he wasn't a drinker or a gambler, and I used to remind my mother of those things, he was a shopper...and I mean a SHOPPER.  He would buy stacks and stacks of boxes of Kleenex, bottles of detergent, cases of canned good, soap, shampoo, toothpaste...if it was on sale, he bought massive quantities of it, and every time my sister, or one of my brothers, or I went to visit them, or if he came over here, oh dear.   He unloaded so much stuff.  It was his love language.  He wanted to bless us all.  He grew up very poor, a family of 12 kids, his dad died when he was little, and it was hard for them.  He knew what it was like to have nothing.  Also, my father wasn't stupid:  he knew he got cranky and miserable, and when his mood improved, he wanted to make up for it...he couldn't say he was sorry, not in words, but he'd give us a dollar or in later years, a case of green beans and four "jugs" of detergent, as he would say...
Anyway.  That's all water under the bridge, and I miss them both, so much, especially around Christmas time.
If we only knew, when we were young, how quickly life would actually fly by.  We might enjoy the moments a bit more, hug those small children more instead of worrying about cleaning the house.  If only we knew how absolutely temporary things are, and that someday, there would be so much silence...

Yes, time does fly by so quickly. I think the older I get, the more I realize that.
Sweet thoughts of your parents. You are wise to see that your Dad was showing love in the way he knew.
Your tree is beautiful!
I'm saving that recipe. It looks very good!

I really love the tree. I wish I could get in the Christmas spirit, unfort...way too many bad things are happening here and since I'll keep it real, I need a reality check. just saying, grin.

Time is so very precious! The older we get, the more that comes into focus. You had a tough childhood but I am glad you understand your dad now. It is good when peace can settle in our hearts over things that were not so pleasant at one time. I love the tree and that it touches the ceiling just made me giggle and think of Christmas Vacation!! It is lovely!! Happy weekend!! xo

Mari, I still am surprised that I am "older", ha. I am still me, but alas, the wrinkles and crackling joints...ugh.
Linda, hugs and prayers to you.
Terri, thank you for your kind words, and yes on the tree, ha.