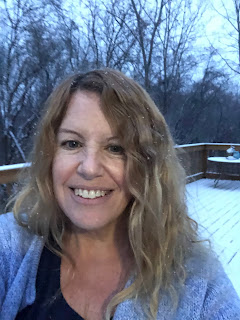 I love being outside when the sun is rising...the lighting is so cool. 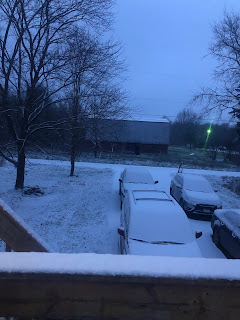 Ben and Ashley live ten minutes to the north of us, they got way more snow! 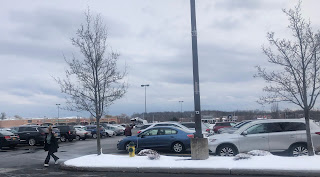 That's Sonja K, Target parking lot yesterday...random picture, she just put the TJMaxx bag in the car for me...I'm getting my shopping finished up.  It's painful, you pick out one thing for three different people, then a few odds and ends, and sixty bucks! You know I'm a frugal shopper, but sometimes I buy things for full price, and my kids just assume I get everything cheap, ha.

Sometimes Christmas time is so nostalgic, I almost cry.  When I was a kid, my mother made Christmas cut out cookies with her metal cookie cutters, a Santa, a star, and a Christmas tree.  She made stacks and stacks of those cookies, then we frosted them, and ate them.  They were there only that one time, that one baking, no varieties.  I treasured those delicate cookies, they WERE Christmas.

On Christmas Eve, we had a large pot of homemade meatballs and hot sausages in red sauce simmering on the stove...and little frozen pizzas, which were an extreme treat back then.  Those glass bottles of Coke, oh dear, that was Christmas.  We always opened our presents on Christmas Eve because my father worked for the county, and he usually worked on Christmas Day.  It was confusing when the news was on TV, and the Santa tracker spotted Old St. Nick coming down from the Arctic circle, and we were ripping into wrapping paper, but my mother had some excuse or another for why he came to our house early.

Christmas Day with my father at work was peaceful.  My mother was more herself when he wasn't around.  I remember her napping and dozing on the couch, relaxed.  I didn't realize when I was a kid that not ALL fathers were like mine.  My mother used to keep track of his moods, because there was a pattern, that we know know as bipolar, which my mom called manic depression.  My father wouldn't hear of getting on meds, he was fine, and that was that.  When he was in a good mood, all was well, but we knew what was coming.  The broody silence, the short fuse...I remember him taking his belt off, and pacing...he would crack it over and over, not hitting anyone, but as if in a battle with his own self, like he wanted to hurt everyone but by some grace, he didn't.  We stayed quiet and kept things clean when he was like that.  My younger brother didn't always get that, he would have a tantrum, and it would be so stressful....

Anyway.  Christmas memories, not a totally blissful childhood, but it was mine.  My father did have a good heart, a giving nature, and it wasn't his fault he was afflicted with such an ailment.  But my goodness, I still find myself almost ducking right down whenever someone else is driving and backing out of a parking spot...my father driving was a total stress fest for us kids.  "Git your heads down, G-dammit, I can't see anything, and all these morons don't know their a$$es from a hole in the ground!"  Oh, he INVENTED road rage.  Once he followed a guy all through the towns, swearing and threatening him, we were terrified, but my poor brother:  it was his teacher!   what, everyone's fathers didn't do that?

My sister and I had always hoped that my mother would outlive him, so she could have some time of peace, but that didn't happen.  Before she passed though, she gave us all a gift, that last summer...she was having increasingly difficult dialysis sessions, and knew her time was running out.  My father had leukemia at the time, and my mother called his oncologist,  told her all of my father's moods and symptoms, and pleaded with her to "put him on something", which she did.  Those seven months we had with my dad after my mother died, before he joined her, he was very kind and even-keeled.

Writing about my dad makes him sound like an absolute monster.  But he wasn't.  He was so responsible and hard working, and he was a giver.  We couldn't go outside in the yard with an ice cream cone without giving them to the whole neighborhood, and that happened countless times.  He would stop the car and have my mom give strange kids money, because he grew up poor, and had a soft heart.  I remember being at an ice cream place with my parents and little brother, and my dad made Casey and I go give these raggedy looking kids some money.  It was so embarrassing, although I'm sure the kids didn't mind.  I find myself with these tendencies all the time, I see people in Walmart who look poor, and I want to slip them a twenty...

It's no wonder though that I want to bake those cut out cookies, it's nudging and niggling me, to go make some.  I know I've made some already, and we actually frosted the rest of those at activity club last night.   I think it's the joy I had as a kid when it was Christmas cookie time...

I think our memories mellow with age and our hearts grow bigger. It sounds like your home was full of love in spite of hardships. Love is all that matters. I love your heart!! xo

Those memories are what made you the person you are today. As I have suddenly begun to struggle with some mental health issues, I can only imagine what your dad struggled with. No one understands how the person afflicted feels. It is sad, but thankful we are learning more about these things.