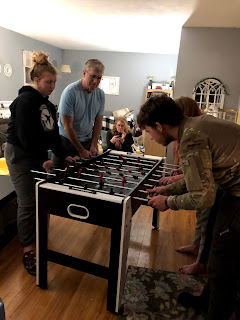 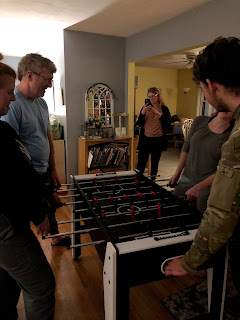 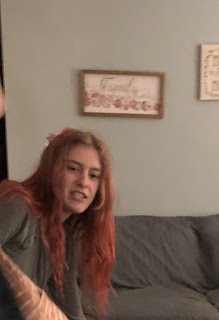 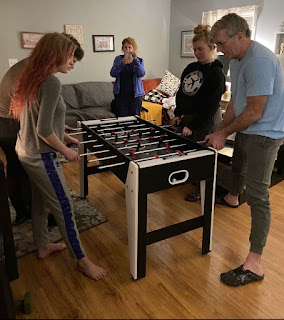 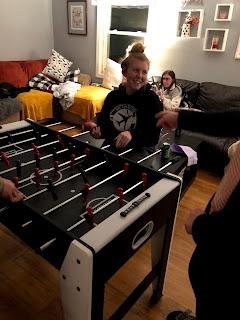 Paul's birthday is next week, but we decided to surprise him early. It's a small-fish table, but it was only $29, one of those impulse buys. We had it hidden, and the kids put it together and brought it into the living room last night. Paul jokingly said at one point, "Stop playing that game and get back on your devices..."

We just finished watching a Netflix show called, The Stranger. It was very interesting, lots of layers, subplots...a bit of language, but nothing really bad in it. It's set in the U.K., so every time they got in their cars, it was like they were going around to the wrong side. We enjoyed it though, parceled it out and watched it together. Now we have to find something else, and believe me, finding something that is appropriate, and of general interest to eight people...well.

We walked in the rain yesterday. I got soaked, my coat apparently isn't waterproof...I mean soaked down to the underclothes. It wasn't a big deal to go in and change, and we didn't melt. 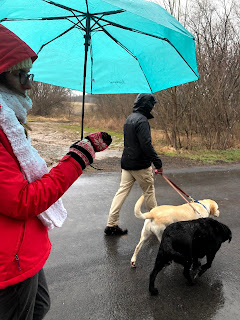 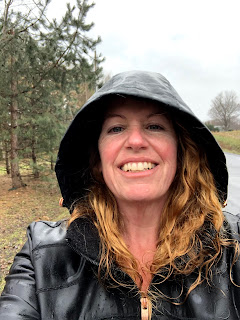 We also sorted and organized and found old pictures... 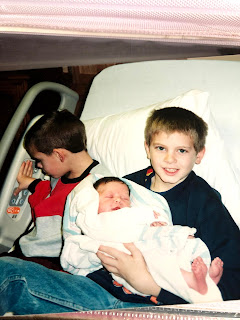 When I had babies, the kids would come to visit, and it was such a joy! I would let them get in the bed and push all the buttons. Joseph is the little boy looking at the buttons, Benjamin was holding the newborn, Margaret Cheryl, our ninth. Benjy was all of eight years old in this pic. Ben's the third youngest, Ab had just turned ten, and Emily was going to turn 12 in a month...so yeah, we had nine kids, oldest one 12. (they got a little closer together after that, ha, Margaret was the oldest of five that were born in five years, and so on...) 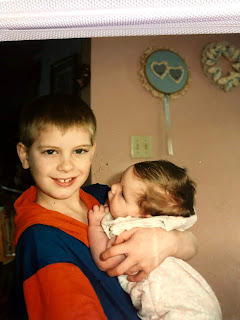 This pic though: the joy that babies brought into the house! It wasn't all turmoil and mess! 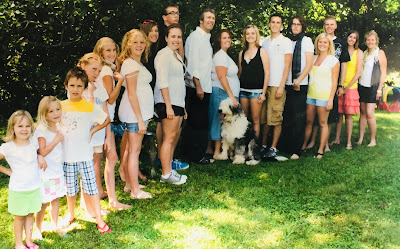 Yes, we had fun. Yes, it was crazy. Yes, I would do it all over again.

Paul and I are the only ones up, sipping our coffee like old people. We have a virtual church meeting at eleven, and will probably make French toast for brunch. Dinner is chicken on the grill, rain or not, and asparagus. We have some things to deliver today, a little something for Lydia, for Anya, and for Elise. I had this idea yesterday to make count-down to Easter calendars, and was trying to figure out how to do it, to put a surprise for each day, then I thought of the plastic eggs! We just numbered them, so they can open one each day, starting today, and there is a big one for the last day, which is Easter Sunday! A few of the days are not candy. There are eggs that go into water and grow into a bunny or a chick, there's a bunny that dances with solar energy. I just thought to drop them off, not go in and say hello of course, but maybe talk from six feet away...it's so hard.

Of course there are many who are really suffering, and the sickness is horrible. The healthcare workers have to cope with so much, unimaginable suffering. So that makes our little discomforts seem petty, so we can practice thankfulness, and pray, and do what we can to build our homes, encourage each other, make things nice...

I think that blogging and reaching out to each other is really important right now. I know I really like reading what others are up to, and being encouraged by their faith. If you have a blog and I don't know about it, how about commenting so I can read it?
Posted by 16 blessings'mom at 9:42 AM

Beautiful post with lovely ideas and memories.
I used to love when I had babies, and Steve would bring the kids in to visit!
They loved to sit in the bed and eat from the tray!
Stay safe and cozy, my friend.

Cool beans!!!! I love that gift and how much y'all had fun. I have set out out Finger Lakes Opoly game for later today. We love playing games and told our son, later this evening, we all are going to put our devices down and play a game, of course, we can take photos, but no onlining, grin.

Have a great day, friend.

Hi Della 👋 I enjoy reading your blog and I’m like you.....practicing thankfulness. We have lots to be thankful for here, but my heart is breaking for all those front line workers. My daughter is an ER nurse in a huge hospital here, and doesn’t tell us how bad it is, I worry about her and the lovely people she works with. I’ve cried, but not to her, but my other daughter. We have cried together. But, on a more positive note your photos are great and it looks like lots of fun with that soccer game. We have been watching Downton Abbey..........I just LOVE that show. We have just finished season 2. We don’t have seasons 4&5 so might have to break down and order them. No one seems to have
them for us to borrow. Oh well..........we certainly are not spending any money sitting at home 🤣 so what if we have to buy them. This is a series I’m sure in 5 years we will watch again. I’m marinating a flank steak for supper.....I dug into the freezer last night. We’ve eaten quite a bit of chicken......that’s mostly what’s in the freezer.......we are ready to cluck 🤣🤣🤣 Have a lovely day. I love your idea for you little grands. They will get such enjoyment.

Happy birthday to your hubby! Something to celebrate And a new soccer table! Fun!

We attempted The Stranger on Netflix . We didn't make it all the way through. We did watch The Outsider. Done by Stephen King. Very good!

We watched The Intruder with Dennis Quaid. It was ok. I think they didn't follow through half way through the movie though.

We are always on the hunt for something good!

Happy early birthday to your honey; so nice he shared his gift with everyone. :)
Sweet pictures and then some sweet memories too. I love the countdown to Easter ideas.
Stay well.