...last night, I had a dream....when you say this in person, to perhaps your teenagers, their eyes may glaze over, but I have a blog!  So we had mice, in my dream, getting into everything.  I spied one in the big container of oats, and announced that I was going to keep it.  I pulled it out of the oats, and oh my goodness, it wasn't a mouse, it was a baby!  A newborn baby girl!  I cuddled her up, and said I'm keeping her.

Okay, it made no sense, but the heaviness of that newborn head against my shoulder,  I just loved her already...I do miss those days.

Back when were we having babies, you didn't know the gender (until my younger ones), so you got out all of the baby clothes, ditched the worn/stained ones, tenderly folded the others, holding up like every other on, exclaiming just how little it was.   Even when we didn't have much money, I always made sure I had some new things for the baby.   Don't even ask about the strollers and prams...because they each certainly had a new one or two or three of those.

Oh dear, I sound like an old lady, talking about way back when.

Today, I have honestly not done very much.  Miss Char was running late, but she made the bus on time, phew, I was already envisioning going out in the one degree morning to drive her, but she scrambled.  I swept and mopped today, talked to my oldest grandchild, Anya, on the phone for a while, cleaned and bleached the sinks and counters, did my twenty push ups and other exercises...then I pulled something out of the cabinet and it fell on the steaming cup of coffee I had just finished making, the last cup of the good coffee Sonja brought home from Oregon...I jumped out of the way, and spilled the cat's water....oh dear.  That coffee cup must hold ten gallons.  What a mess, dripping down all over the white cabinets.  I did have the thought:  I'm glad I'm the one who did this...   but dang, I had just mopped the floors.

I didn't start packing yet, but I did get out the sunscreen and set it on the counter, and I made a mental note of what I need to get out...we are only bringing a personal item, and sharing a checked bags, so I have to pack lightly.  I am planning to bring the laptop though.  It's vacation, and I can't go without blogging on vacation!!!!  So yes, you all get to go to Florida!   I can't even believe it.  Sand, sun....aaaah.

Today, the sun is shining on the snow.  It's a lovely day to go out and about, and I do have some things I would like to go do.  I have $10 Kohl's cash, and don't want to spend $35 to get free shipping, and rarely what I want is free store pick up.  I want to get a few things for a family who is home quarantining, and maybe some more coffee....I have become so picky about coffee.

Sonja just came in the door from nursing school, so the dogs were barking their heads off.  It's a good thing they're cute. 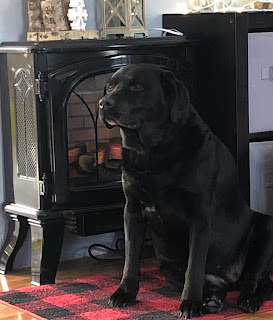 Suri is nine and a half, her beard is getting white. 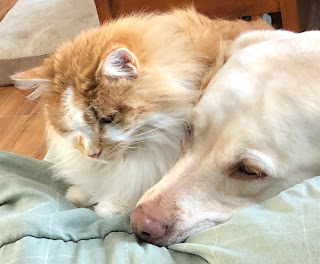 Orange Guy is all about staying warm and cuddly.  Sunny tolerates.  Maybe she secretly likes it.

Last night, we had chicken soup for dinner, it turned out really yummy.  I cubed up chicken breast, tossed it in flour, salt and pepper, browned it up, added chicken broth, and simmered it with some chopped celery and carrots.  I added a bag of frozen mixed veggies later.  The egg noodles were served separately, as I don't like how they hog all the broth, and I don't want to eat them, either.  I had mine over cauliflower rice.

So yesterday as I searched the freezer for the pork chops I KNEW were in there, I ended up pulling everything out.   It gets so disorganized!  It's the side-by-side refrigerator, and the freezer design is...well, it's hard to get things organized!  After washing the shelves, removing the door storage thingies and washing them all up, putting everything back in some semblance of order, I felt like I had accomplished something.  I am so lame.  Paul was getting more coffee, and I announced, I cleaned out the freezer!  Charlotte came home from school, I cleaned out the freezer!

I did find the chops, I froze them in marinade, they're in the refrigerator thawing, for tomorrow night.  Tonight we're having pizza because the dough is rising in the fridge, looking ready to use.  I'll also make some wings in the air fryer.  Turns out we have lots of them, ha, don't go shopping, just rearrange the freezer!

Has anyone read anything about the trucker rebellion in Canada?  It's quite awesome, they are protesting mandates, and 50,000 trucks are headed to Ottawa.   Trudeau dissed them, of course. (He called the protesters "a small fringe minority who are holding unacceptable views."  (who is HE to say what are unacceptable views??!!!!)  I've read that truckers are refusing to supply the Quebec Walmart...in Quebec, the unvax-ed are allowed to go into Walmart, but only to buy essentials, with a store employee accompanying them.  They're not allowed to buy crayons, or clothes, or washcloths, or vacuum cleaners.  Does this make any sense to anyone?  Of course not!

Ah well, Sonja is relaxing here after a busy day of class, so I am going to chat with her...this post has been interrupted no less than ten times, it's disjointed...but it's getting published anyway....you can't overthink it on the blog, or nothing would ever get published...have a very good day, everyone!

Our weather should be back to normal by mid-next week. It will be COLD this weekend though. Glad I don't have to go out, except to church. Safe travels!!

I had no idea that Canada had guidelines on what you can buy. What do crayons have to do with anything? I am glad that truckers are standing for their rights. I personally felt that the vaccination was necessary for myself and my family. I don't feel that it is right to put so much grief on those that choose not vaccinate.

We’re also heading to Florida in a couple weeks. Hope it warms up there by then! I hear it’s going to cold there this weekend. Well, it WILL be warmer than in Minnesota - we’ve had pretty chilly weather (-15f predicted for tomorrow morning.)