here in the snow globe...

...Lake Effect snow bands seem very random...the sun was shining, then it wasn't!  We were trapped in a beautiful snow globe, now the skies are blue again. 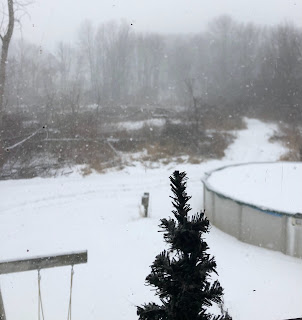 Well, would you believe that the sun is shining, and it's snowing?

Since I don't have much going on, I'll tell you a story that I might have told before...

A long time ago, we were on food stamps.  SNAP.  See, I was pregnant, and Paul changed jobs.  Under our new health insurance, the doctor who had delivered several of our babies was now out-of-network, which meant I had to pay more for coverage.  I decided to see if I qualified for supplemental government health insurance.  The appointment was enlightening, we qualified, and the lady who worked there offered that I get SNAP benefits too.  Oh no, I said, we don't need that.  She said the paperwork was all the same, we would just get a little card, and several hundred dollars a month towards groceries...now, I don't like to rely on the government, but...I did it.  We had a lot of kids, and money was always tight, so it was like a dream come true, although I did feel guilty sliding that card.

About a year later, one busy morning, there was a knock at the door.  I shouldn't have answered it, shouldn't have let Lisa in.  I don't know if that was her name, but she seemed like a Lisa.   She identified herself as a Cayuga County social worker/government employee, and sort of barged right in.

Let me set the scene...the toddler was in yellow footie pajamas, and had just pooped.  That alone, ugh.  But there's more.  There were two beer bottles on the kitchen counter.  There were grocery bags here and there, because I hadn't gotten around to put away the non-cold stuff from the shopping trip the day before. There were toys strewn around.  But the worst part was me:  I had on a floral knit button down dress, and I was pregnant...and a few of the buttons were missing, as this was just around-the-house.   Oh yes, barefoot and pregnant, gaping openings on my big tummy...    Mortified can't even begin to describe it.  Lisa looked around in distaste, sat at the table , and opened her official notebook.  She had been checking records, and according to the DMV, we had the correct number of automobiles, but also a camper, which wasn't reported in our assets.  Oh dear, I never ever realized that our camper, which is at our church property, too old to tow anymore, was an asset, I wasn't asked about it, and honestly, didn't withhold anything!  But this was a moot point, as ignorance is bliss but won't hold up in court.  Lisa asked a million questions about the camper, determined it was worth $2,000, so she informed me that I was out of the program.

If being "out of the program" meant that Lisa was never coming to my house again unannounced, then YAY, I was out of the program! ! It was the most humiliating thing.  And I shudder to think that in my file, somewhere, is that information, who knows what her notes said?  If we ever fell on hard times, and had to apply for assistance, the first question is probably:  Have you ever been kicked out of the program?

(I just remember wondering to do about the poopy toddler, I mean, do you just leave the room and go change a diaper?  Change it in the living room, it would be awfully stinky!   I didn't change it, nor mention it, but it was the elephant in the room, or rather the OTHER elephant in the room, first one being the pregnant lady with gaping missing buttons on her dress...)

Yes, I was glad to be out of the program.

I think it was good for me, to be so humiliated.  I did cry, when Lisa left.  I had always tried so hard not to be a big slobby family...the kids were always dressed nicely (matching!), and cleanly, whenever we went out and about.  If you have one child, and they have on two different sized boots, it's funny and cute, but if you have TEN, and one has two different sized boots, wow, you're in over your head, ha.  (Yes, that happened too...one of the older kids needed wisdom teeth pulled, and in the waiting room, I realize that the toddler (Sam!) had on one of his boots, and one of his older brother's boots, same boots, different sizes).

People would always look, no matter where you went, when you brought a passel of kids.  So they HAD to be clean and neat, and they also had to behave, which they really did.  I'm not saying they never played catch with rolls of paper towels or sang songs to the tops of their lungs or sneaked huge numbers of things into the cart, playing when will mom catch on...and I've mentioned before how the Walmart greeters used to give out those little smiley faced stickers.  My kids would do their own smiley faces as they yes, please!, then deviously played who can stick a sticker on Mom's butt without her noticing.  I would notice here and there, but there was always a kid who succeeded in getting one on that I didn't notice until I got home.

Getting home...I remember pulling into the driveway in that big van, and praying for strength...now it wasn't THAT bad, but it was definitely an exercise in patience.  The baby, the toddler, the two year old, the four year old...if it was during the school day, we were on our own...if it was when the school kids were with us too, it may have been easier, may have been harder....ha.  By the time we got everything and everyone in the house and put away, oh my goodness, time to make dinner?

Man, are you good at your memories jogging mine 😊 Three incidents that had me sure 'they' would take my kids away: a neighbor at an old place we lived called social services on us when my four were"playing too close to the road"! They weren't even in the road! Grrr. Then, my crawling fifth baby goes out the back door, down the porch steps, around the side of the house, into the street intersection, all while I sit on the front porch swing, reading. I look up when a MOTORCYCLE stops for my child! Same house, it is a wonder that great neighbor didn't see that one. Next house, sixth toddler walks into the road, and a good Samaritan stops in the driveway to make sure he's being watched. I spent the rest of the day in the basement not answering the door or phone, just in case. I think I have your poopy diaper and popped buttons beat😂
Been there!
Valerie

Oh Della, I love your stories! You are such a humble person and I really appreciate that rare trait.
My all time favorite Della story was one you posted years ago when the electrician did not charge you for his work. He said “I always donate one job a year and you folks look like you really need it”. I am laughing all over again just remembering that!!
♥️♥️♥️♥️Susan

I did get sick of winter and moved to Florida. Now, I love winter!!

Brahahahahahahaha 🤣🤣🤣 Oh Della you are too funny 🤣🤣 I’m sure you must have been mortified, but funny to look back on. Lisa sounds like a bag anyway!!

You are still getting hammered with foul weather I believe. I’m with you………..sick of winter 🥶 and actually it didn’t really start here till just around Christmas, so I have a cheek to complain, but really this has been awful everywhere in North America I think.

I think we have all experienced getting caught off guard. Always at the worst possible time. Then you tell yourself "never again" and the minute they leave you start picking up and cleaning up. House cleaned - everyone looks decent - you can bet no one will show up. Sorry this happened to you - but, I promise, it won't be the last time. Go with the flow - don't allow yourself to be judged by anyone. That's life.

Such fun memories! I am glad that you can look back on that day and not feel like it is something you should not share. Some of the things that the government programs consider as
assets really are ridiculous!

I think that is what is wrong with the "Lisa's" err Karen's of the world...they need to be more kind. But nope, that must be a thing for working for the government-meanness. I am not ashamed to say we were also on SNAP. Right now, we use HEAP. And you know what? Perhaps that is why NY is in so much financial trouble and high taxes? Just wondering. Pretty much everyone I know is on some sort of assistance, Della. It's just so expensive to live here, I see that now. ANYWAYS...Cold and bright sunny here. STILL SNOW on the ground and probably will be until late Feb. I also wanted to say thank you for your kind words you leave on my blog. I truly appreciate it.

Oh Valerie, I feel your pain...we temporarily lost a two year old once (Margaret) at an outdoor symphony in a big county park....it was AWFUL. Susan, after that incidence with the electrician, I was with like six of the kids, trooping out the door of the dollar store, and he was going in, held the door for us, recognized us, greeted us heartily....we were like, "Wow, we thought we'd never see him again!..."
Terri, I think you're very smart! I can't move there because of the kids/family, but I sure like to visit!
Marilyn, it's calm here today, but very very cold...but beautiful, we got fresh snow yesterday, and the sun sparkles like diamonds on it...
Mary Ellen, you nailed it, no one EVER stops in when the house is clean, ever. My MIL was absolutely the best at coming when things were the worst...
Carol, I struggled with sharing that story, don't want to embarrass the kids too much, and I felt kind of vulnerable all day, thinking I should delete it...but it happened.:)
Linda, the Karens, ha. NY: oh, it is so sad the taxes and programs and rules and mandates have done so much damage to such a breathtakingly beautiful state. And there's nothing wrong with assistance, nothing at all, we pay enough taxes!!!!!

I've heard these same "stories" (plus everyone's above me in the comments lol) from people here who've gone through the same things... and so I never applied because 1) I didn't want to ACCIDENTALLY NOT ON PURPOSE forget something I should have listed and 2) never wanted a LISA or KAREN or any other named case worker to come a-knockin'! Geesh, what is it about a goverment job that makes these people like this?! I struggled mightily as a divorced single parent... and the poopy diapers were kept to myself. LOL!! Hugs and blessings, Della!