snowy morning, too snowy for school

This is the kind of picture I guess I should expect.....I asked Joseph to take a picture of the snow. I especially like the coveralls that Sam hung over the railing. They look nice with snow on them. And it reminded me that I had asked Benjamin to put away the patio stuff..... 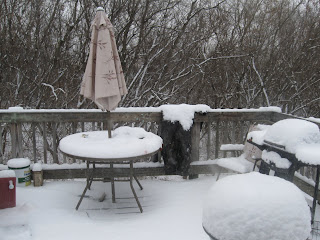 Cold and windy and snowy. That is ONE of the reasons why I did not send Evelyn, Suzanne, Sonja, and Jonathan to school today. The other reason is that they went to bed so late, and when I went into their room and looked at them all snuggled in their beds, I decided to give them another day off. 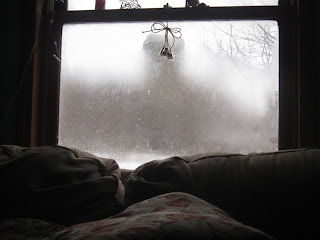 I am also very tired, and shouldn't be held responsible for any decisions I may or may not make today. After my shower last night, or should I say this morning, it was quarter of three. I turned on my favorite thing, the electric blanket, and fell asleep immediately. I usually turn the blanket off as soon as it heats up, but I conked. Then Camille woke up, and after that....I was awake for a while. And this was only a 4 hour chunk of time.....I got up and dressed and when I went into their room....oh well. I like my kids, and it is SUCH an exciting time of the year, and it is fun to have them here with me. AND: they want to see Emily!
So two of my December birthdays have passed, next week Margaret turns into a dreaded teenager, 13. Her birthday is on the 22nd. When she was born, my 9th child, I was 31 years old. My oldest was 11 (a month away from 12), Abigail was 10, Benjamin was 8, Mirielle was 6, Joseph was 5, Aaron was 4, Mali was 2, and Samuel was 16 months old. Margaret's birth was amazing. I went to the hospital in the early morning hours right on my due date, and she was born at 3:40 in the afternoon. The doctor was very patient, and the nurses on duty that day were not hurried cheerleaders. That was my first introduction to the "rest and be thankful" stage. I was fully dilated, and the contractions stopped for a few minutes, and the dr. was in no hurry. Then, contractions again and immediate birth, easy and quick. It was a Sunday, and our church was having their Christmas feast (what a good reason to miss the feast!), and we called out there to tell them that Margaret Cheryl was born. (All of the kids were there with the girl who was helping us out). Margaret's first night was rough, she did not want to be put down. But she was oh so sweet and cuddly, she was eight pounds 7 ounces, and she was beautiful. I went home from the hospital on the morning of the 24th, the day we always went to Uncle Bob's for Christmas eve. We weren't about to miss Christmas there just because we had a newborn baby! Then, when we were getting ready to go, Mirielle got sick. Paul volunteered to stay home with her, and off I went to Uncle Bob's house with the other eight kids and our helper. For the record, our helper was a nice girl, and she kind of helped me that night. I will say no more. Because my mom and my nieces and nephews and my sister and sister-in-laws all helped with the other kids, and I just took care of Margaret. I must have still been on that baby high.....
Anyway, her birthday is coming up and I still owe her a party from last year.
Tomorrow is going to be fun!!! Someone has their driving test, I cannot tell who, and if you know us in real life don't bug and ask or someone will kill me for even writing this. See, if they don't pass, it is easier if they never told anyone they were taking it in the first place. Abigail took hers three times. It was especially hard when she took it at the same time as her younger brother Benjamin, and he passed. Anyway, tomorrow's high temperature is eighteen degrees. What a nice day to stand outside while someone takes their driving test. I am thinking that if anyone wants to do any shopping, I can drop them off at WalMart and then it will just be me standing out there. I wish right about now I had a pair of boots. Yes, I live in the snow and I have no boots. I should get some.
Joseph made me a nice cup of coffee this morning, and but we have not had breakfast yet. I SHOULD get moving. I am just like a little kid, I am so excited about Emily being home, and about Christmas.....All I want to do is wrap presents and make cookies and have fun with the kids....so maybe I just will!

Thanks for your comment on my post, I wish I could come visit indeed :)
My cousin passed her driver's license 7 times.. then she finally got it :)
I haven't passed it even once. I drove about 5 min with my husband this fall, for the first time in my life...I'll need to pass the license once in France. we'll see how it goes.

Also for snow I have hiking boots, they are such a dream to walk with, and they are gore-tex, so waterproof (so far). Mine are northface and quite expensive, but definitely the best investment I made this year.
I think these http://www.altrec.com/the-north-face/womens-vindicator-mid-gtx-hiking-boot

I bought you a pair of boots last year, the girls found them when they were cleaning out the closet at least a month ago.. and they've been in the back of my van in a box with some other good stuff.. yes, you'll thank me.. Anyway, I keep forgetting or it's not quite the right time, you know what I mean?? Also, I'm not positive that they are your style.. you were quite the "Boot Girl" some years ago.. and I'm not sure if anyone will be traveling in either direction to get them to you, it's looking pretty white out there today..

I love your snow pictures!!