what a Christmas we had!!!

On Christmas Eve, we packed up in our big van and our little van, and all 18 of us went to my brother's house for a few hours. It was nice to see everyone, especially my brother's sweet little grand-babies. We got home....and put out some food. Emily had baked bread, and made bruschetta, corn dogs for the kids, kielbasa, chips and dip, cookies, fudge.... 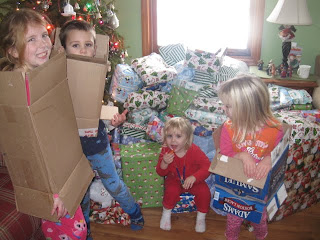 Christmas Eve Secret Santa....(most of the pictures are on Mirielle's camera (I am just SO prepared...my batteries were dead)...this is Suzanne, Sam, Evelyn, our friend Stine from Norway holding Camille, and Sonja. 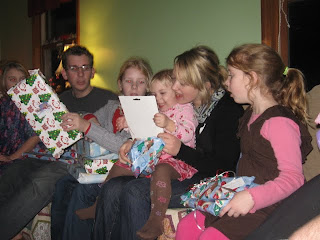 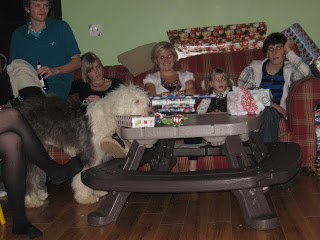 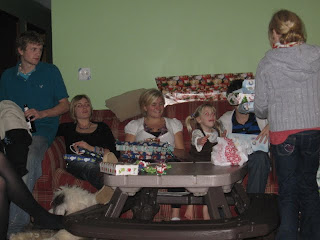 Jonathan, Emily, Ben, Mali, Miriellel, Charlotte Claire...then my batteries went dead. We did gifts, then played charades and did ride-on races and inprov....it was great fun. 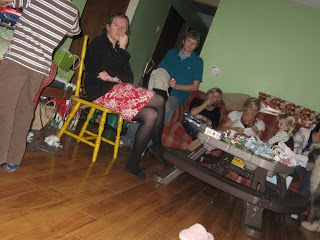 Christmas day we had brunch, homemade waffles with fruit, and scrambled eggs and bacon and juice and coffee. But before that, we had cinnamon rolls, so the kids could get to the good stuff:
Waiting for everyone to get up....we started opening presents at around 9:45. 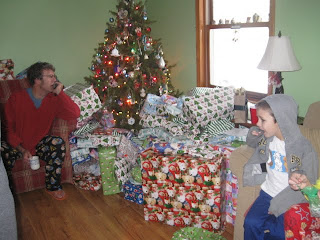 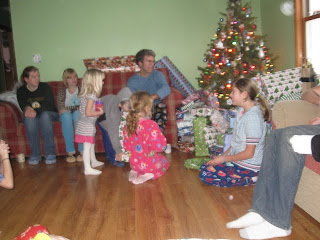 Jonathan was pretty excited about his romote control car. 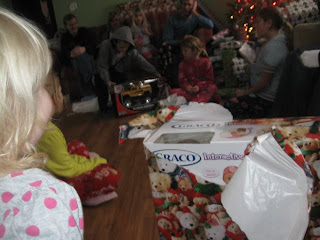 Camille got a dolly with a stroller, highchair, and bed. 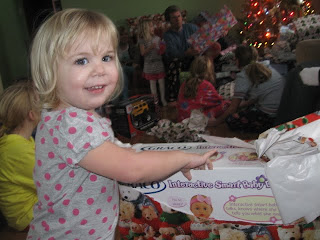 It actually wasn't too crazy in here at all. 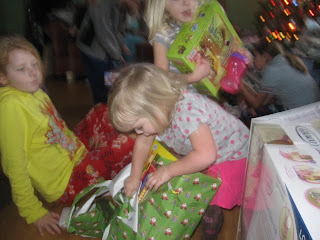 Joseph wondered why I got him StarWars Pez. 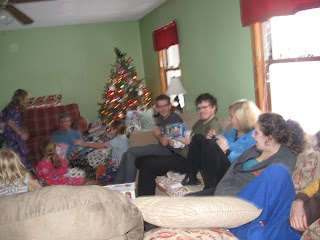 Sonja got her Fancy Nancy doll. 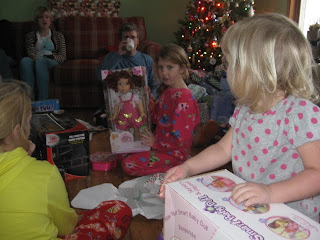 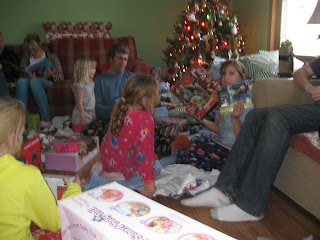 One of the nice things about Christmas this year was the "down time" with everyone around. Benjamin can be the nicest boy. He helped open Barbies, and put batteries in things. 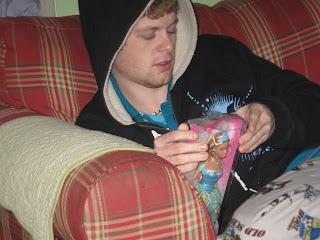 Sam and Joseph (with his new Batman comforter, which he DOES like) 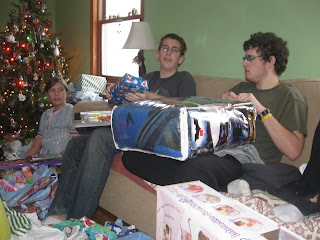 It was a bit crowded, but we kept most of the paper picked up.... 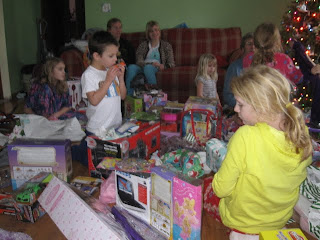 Evelyn got a Barbie game for the Wii. 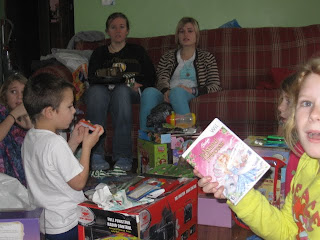 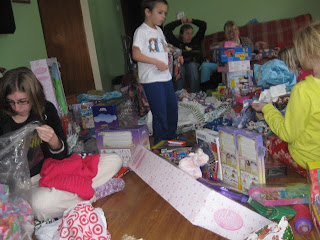 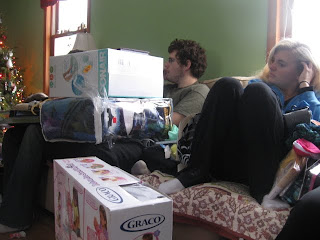 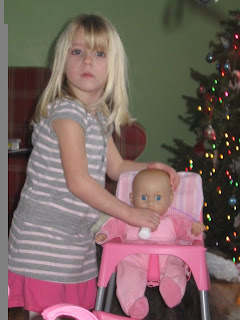 Camille has a thing for bras. 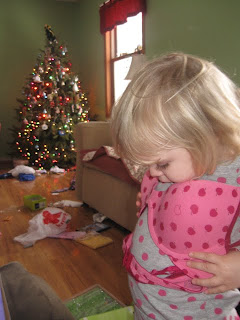 hmmm. She DOES have 10 older sisters. 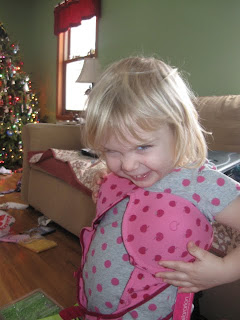 What can I say? It was just plain funny. I had found these bras for 75% off at Target, and bought a bunch of them....I wrapped them up, and told them to trade if they got the wrong size.

Sonja and Suzanne with their dolls. 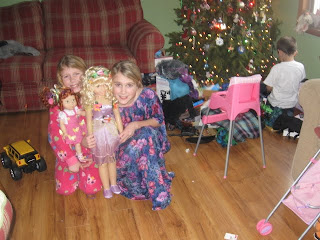 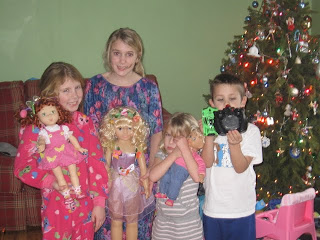 These guys got what they wanted for Christmas, finally, PHONES! They were sitting there texting each other. Aaron and Abigail. 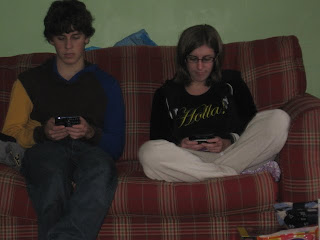 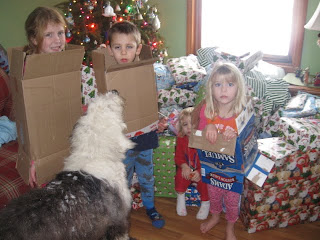 Last evening, my sister and her husband and her seven daughters and two-son-in-laws and her two grandchildren came over for dinner and games and fun. We had jerk chicken, which was very good, hot wings and barbecue wings, shrimp, Greek salad, carrots broccoli celery green peppers black olives and dip, chips, homemade cream puffs and elcairs, cookies and fudge, crackers, cheese, pepperoni, kielbasa.....We played What If - Then, and charades, the girls sang, Paul and Joseph played their guitars, we wrote poems, did some improv, it was just too fun to explain. Jonathan pretty much summed it up when he said, "This has been the best Christmas"....we asked him why, and he said, "It has just been SO much fun!"

Della, You have the most fun of anyone I know!! What a wonderful Christmas with all your beautiful kids. Your family reminds me of what Christmas should be about. Love it!! Camille is hilarious with her "bra". These are such good times.

I so enjoyed your pictures and the one of the dog in the bra had me laughing out loud. =D Such fun and such good times!! =)

Oh, I am cracking up at the bra pictures, and your little kids wearing the boxes...all those toys and they play with boxes! My kids do that too! Looks like you guys had a very fun Christmas!